The General Assembly of the State of Tennessee is honoring the life and accomplishments of Vivien Thomas, an African-American laboratory assistant at Vanderbilt from 1930-1941 who developed several operative techniques, designed surgical instruments, supervised surgical laboratories, and instructed at Johns Hopkins School of Medicine for more than 35 years.

Proclamation 018388 was signed on July 10 by House Speaker Beth Harwell, and Rep. Brenda Gilmore. A “proclamation” is a memorializing or congratulatory document.

“It is the pleasure of the members of this legislative body to posthumously honor those venerable individuals who were pioneers in their fields, devoting their gifts to the betterment of humanity,” the proclamation states.

Thomas graduated with honors from Pearl High School in 1929 and took a job as a laboratory technician at Vanderbilt University School of Medicine, where he worked 16-hour days for Alfred Blalock, MD, performing operations on animals that would advance Blalock’s studies of high blood pressure and traumatic shock. When Blalock left Vanderbilt to become chief of surgery at Johns Hopkins Medical School, he insisted Thomas be hired as part of his team.

Along with cardiologist Helen Taussig, MD, they were pioneers in the field of cardiovascular surgery, developing a procedure to alleviate the congenital heart defect cyanotic heart disease, commonly known as “blue baby syndrome.”

Thomas first created a blue baby-like condition (cyanosis) in an animal model, then corrected it. In nearly two years of lab work he demonstrated that the corrective procedure was not lethal, persuading Blalock that the operation could be safely attempted on a human patient. During this first procedure in 1944, Thomas stood on a step-stool behind Blalock coaching him through the procedure.

After receiving an honorary doctorate from Johns Hopkins, Thomas was appointed to the medical school faculty as an instructor of surgery. He died in Baltimore in 1985.

“Vivien Thomas cannot receive enough accolades given his accomplishments and the circumstances that he had to face to be successful,” said André Churchwell, MD, who holds the Levi Watkins, Jr., M.D. Chair and serves as Chief Diversity Officer for VUMC. “We are thankful that Kathy Wagner, a diversity and inclusion advocate, was able to work with Beth Harwell and Brenda Gilmore to make the proclamation a reality. It is unfortunate that Mr. Thomas is not alive to receive this honor, but we are ensuring that copies of the proclamation are sent to his family.” 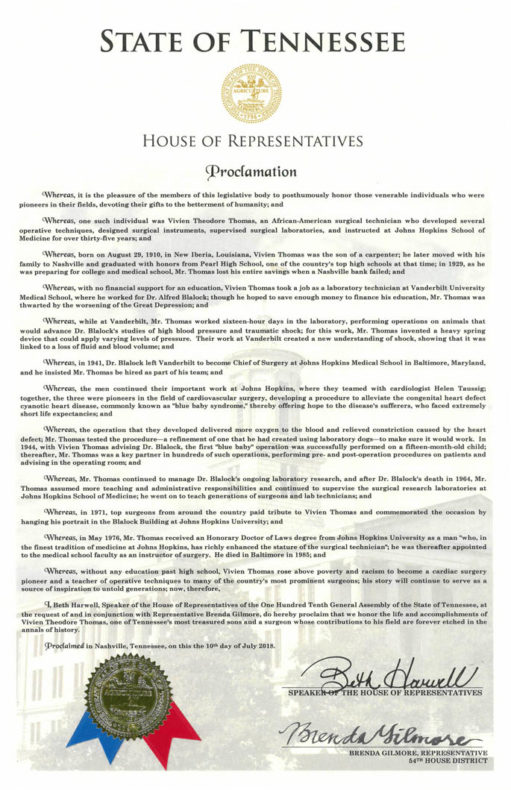