Vanderbilt University Medical Center (VUMC) has been named to the ‘Honor Roll’ of the nation’s top hospitals by U.S. News and World Report in their 2018-2019 ranking of ‘America’s Best Hospitals.’ VUMC is one of only 20 hospitals nationwide to earn this distinction. 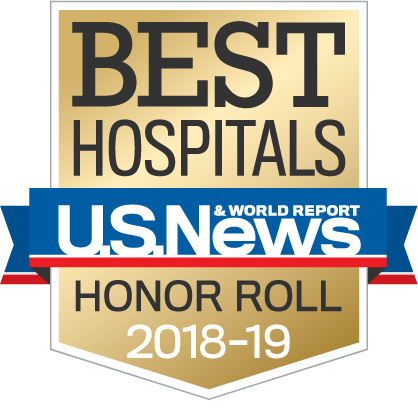 In addition to ‘Honor Roll’ status, 10 of VUMC’s specialty programs are nationally ranked, with three specialties — Gynecology, Nephrology and Urology — rated in the top 10 among peers.

The rankings, released today (Aug. 14), reflect VUMC’s longstanding commitment to offer compassionate, personalized care to patients and their families, and highlight the capabilities of its people to advance scientific discoveries into innovative clinical care.

To arrive at these rankings the U.S. News’ methodology is based largely on objective measures such as risk-adjusted survival and readmission rates, volume, patient experience, patient safety and quality of nursing, among other care-related indicators.

“Recognitions such as these from U.S. News are the result of contributions from each member of the VUMC community to deliver the very best to the patients we serve. I want to express my appreciation to our physicians, nurses and staff for these outstanding results,” said C. Wright Pinson, MBA, MD, Deputy Chief Executive Officer and Chief Health System Officer for VUMC.

VUMC is nationally ranked in these 10 specialties:

VUMC is also recognized as nationally high-performing in eight procedures and conditions:

U.S. News evaluated 4,656 hospitals to determine this year’s rankings. Initial eligibility to be ranked requires that a hospital must be a teaching hospital, or affiliated with a medical school, or have at least 200 beds, or at least 100 beds and offer access to certain medical technologies. Ranking in a particular specialty imposes a second eligibility requirement meeting a volume/discharge threshold that varies by specialty.

The ‘America’s Best Hospitals’ rankings can be found online at www.usnews.com/besthospitals and the publication’s print edition, scheduled to be released later this month.