The pivotal role that long distance familial genetic searches played in the apprehension of the notorious Golden State Killer — and as a tool in dozens more cases since — has led experts from Vanderbilt University and Vanderbilt University Medical Center to make a provocative proposal about how investigative use of DNA should be regulated.

In an “Insights” piece in Science, they write that it’s time to think about whether a universal genetic forensic database would be a better method of balancing law enforcement and privacy concerns, and if so, how it would be structured and regulated.

DNA testing is a decades-old tool for law enforcement. But, as the authors of the study point out, traditionally it has been limited to accessing DNA databases of people who are convicted of crimes and, in some states, those who have been arrested. As a result, this approach disproportionately targets poor and minority populations.

More recently, the widespread interest in tracing lineage or locating long-lost relatives has spurred millions to post contact information along with sequenced DNA results, resulting in a patchwork of data pools that law enforcement can access with little to no oversight.

The concept of a government-run, universal genetic database isn’t new, but it is contentious and has largely lived in the shadows of academic writing. 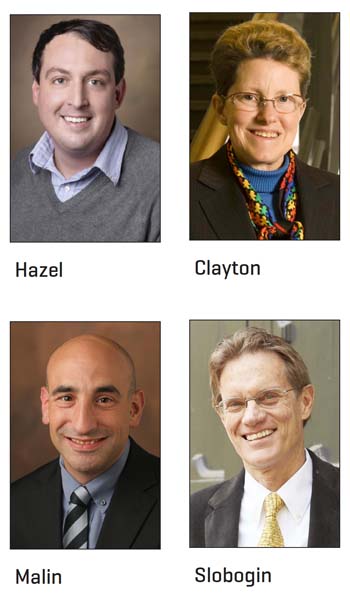 The four Vanderbilt experts, from different scholarly backgrounds, aim to use this publication as a platform to spur a public debate about how to protect personal pursuits from legal inquiry.

Below is a conversation with authors:

Q: Mail order genetic tests to find relatives or trace ancestry are popular. Why is now the right time to get people thinking about the unexpected implications and potential regulatory approaches?

Hazel: The use of direct-to-consumer genetic testing has proliferated in the last several years, and so too has the number of consumers who choose to upload the resulting genetic data to publicly accessible databases in order to gain insights into their family history and health. This practice can have unintended consequences for not only the individual, but also their distant relatives.

A recent study demonstrated that law enforcement can use these resources to identify up to 60 percent of people of European descent, and that number is predicted to rise to 99 percent as more people use tests, such as 23andMe and Ancestry.com, and choose to share that data. Therefore, we argue that we already essentially have what amounts to a universal database when you consider the various publicly accessible and private genetic databases that law enforcement might gain access to. However, there is currently little regulation or oversight of these law enforcement activities.

Clayton: More than 1 million people have put this information out there in order to identify connections with family members and their ancestry. I think what they don’t appreciate is that information could be used to identify other connections they might not be so enthusiastic about.

I’m interested in fundamental fairness and using the DNA for specific purposes. I want people to be secure in the knowledge that data about them are going to be used for finding their families or for research, and that these data are not going to be used for forensic purposes without real safeguards. I think that’s a compelling case.

Malin: This has become such an interesting opportunity due, in part, to the fact that technology has advanced to the point where market competition has made sequencing cheap. Combined with easy access to websites that support the dissemination of such information, we have created a situation where people are incentivized to make the information available for all to see.

The existing forensic databases have a very biased view of our country’s population, so if we’re going to support law enforcement in their investigations, we should make such investigation fair for everyone. And a natural way to do this would be to collect data on everyone — provided appropriate protections are in place.

For instance, we could require law enforcement to obtain a warrant to search a resource and create accountability structures that currently do not exist. We summarize several aspects of such a solution in the piece, while explaining that such a system is feasible given technology that exists today.

Slobogin: The Golden State Killer case got a lot of play in the press. Because the police could not find this white, middle class individual through their own DNA databases, the case illustrated how existing government-run DNA sources are skewed in the direction of people who are disadvantaged and people of color, the type of people who tend to be arrested and convicted. Yet the mere fact of arrest should not justify collecting a person’s DNA.

Q: Your piece highlights a bevy of questions that must be wrangled, including personal privacy, fairness and intrusion, data safety — not to mention concerns about government trust. What kind of reaction do you expect to this piece, and more broadly this concept?

Hazel: A universal forensic database is certainly a provocative proposal, but it all comes down to starting a conversation about the deficiencies of the current system, including the racial biases inherent in existing forensic databases and the lack of regulation surrounding law enforcement access to publicly accessible databases.

Clayton: I suspect some people will like it and some people won’t. Our real point on this is to have a conversation and to raise the idea that what’s currently going on with private companies using GEDmatch (a publicly accessible database to research genealogy) in conjunction with the criminal justice system, but without the types of procedural structures that should be in place, is not OK. The bias of current forensic databases is not acceptable either.

Malin: We’re not the first to mention this, but, to the best of my knowledge, we are the first to give it such structure. I have no doubt that some people will have a knee-jerk reaction and argue that this proposal wreaks of a surveillance state and that it’s a non-starter.

In this respect, it is possible that some people push back because the proposed solution will be considered a direct infringement upon personal privacy. Others may push back based on the expectation of scope creep. History has shown that, at times, resources meant for one purpose may end up used for other purposes. The expanded use of the Social Security number over time serves as an example of such scope creep. However, with the appropriate accountability and governance in place, it is possible to mitigate the risk of such a situation.

Slobogin: Very heated. I’ve been at a conference where it was raised, not by me, but by someone else. He was a beloved professor at the host law school, but he was lambasted by several members of the audience. People see this as a significant move toward a totalitarian society. I think it’s an overreaction but it’s a plausible concern. We’re ready for this conversation.

Q: What do you want people to consider when thinking about the future of how DNA sequencing is used and accessed?

Hazel: Individuals should be aware of the potential unintended consequences of undergoing direct-to-consumer genetic testing and uploading that data to publicly-accessible databases. Law enforcement may use this information to identify not only the individual who has uploaded the data, but also their distant family members. It is important to recognize that the under-regulated familial searching techniques that law enforcement currently employs can be haphazard and error-prone.

In a given case, a search of a publicly accessible database typically results in dozens or hundreds of potential hits that need to be investigated, placing numerous distant relatives (or possible relatives) into contact with law enforcement as police try to retrace a family tree to find someone who is likely to fit the description of the perpetrator. In the Golden State Killer case, this resulted in at least one false lead before the alleged killer was found; law enforcement showed up in a nursing home in Washington and got a court order to compel an elderly man to provide a DNA sample, a DNA sample which ultimately exonerated him.

Clayton: There are a number of things that need to be explored. People have to understand when they put information about themselves out there, whether it’s through GEDmatch or Facebook, it is beyond their control. Many times, people say ‘yeah, that’s fine.’

Individually, people should know what revealing information about them means for them, but posting these data also has implications for their relatives. Yet one person has no legal obligation to his or her relatives. For example, I cannot prevent my siblings or cousins from revealing their identified sequence data. The possibility that they can be identified even if they did not post their own sequence data may make the lack of oversight of public databases even more troubling for some people.

Using DNA in forensics is an old question. The two new things are that millions are publishing their own identified genetic information. That’s really new. And the existence of identified DNA when you’ve got full sequences makes familial searches easier than can be done with forensic databases. Those two things are game changers.

Malin: It’s really a question of how society wants to govern itself. The way law enforcement currently uses this tool leads to a lot of collateral damage. They start questioning an entire family — and it may not even lead to the right individual.

It’s this threat to our social fabric that leads me to think the damage is worse than creating an infrastructure to let the criminal justice system do their business in an accountable way. The more you start thinking about it, the way society is being investigated is like cowboy country at the moment.

Slobogin: If members of Congress don’t have a stake in the game, if their kids aren’t the ones whose DNA is being collected, then privacy takes a back seat to law enforcement. A universal database would ensure there would be more emphasis on privacy and accountability.