The Vanderbilt Eye Institute’s 50th anniversary book recently won four ADDY awards, including Best of Show in the print category, in the 2021 competition conducted by the Nashville chapter of the American Advertising Federation (AAF). 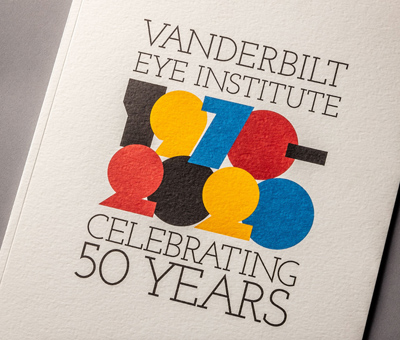 The VEI book was produced last year to document and celebrate five decades of vision treatment at VUMC and in our region.

In addition to its “Best in Show — Print” win, the VEI book also picked up Gold Awards in “Publication Design,” “Editorial Spread or Feature” and “Cover Design.” The awards go to VUMC’s agency that worked on the book, DVL Seigenthaler.

“With the pandemic forcing us to cancel our plans to celebrate VEI’s 50th anniversary, the book became the most meaningful way to mark this important milestone,” said Paul Sternberg, MD, VUMC’s Chief Medical Officer, G.W. Hale Professor and chair of Ophthalmology and Visual Sciences and director of the Vanderbilt Eye Institute.

“Our partners at DVL Siegenthaler embraced our hope to create something a bit different — somewhat less traditional, ‘out of the box,’ unique and creative. We were thrilled with the final product and it is so gratifying to learn that our creation received such an incredible honor.”

Winners of this local competition go on to compete in 15 regional levels, with those winners advancing to compete for the American Advertising Awards later this year.

All of the awards, including those for the VEI Book, are at https://www.aafnashvilleawards.com/.