Jeff Vanderford always dreamed of walking his daughter down the aisle on her wedding day.

But in 2007, while Jeff was serving in the military as an airborne paratrooper, a routine jump out of a plane led to his breaking several vertebrae, shifting them toward his spine and cutting into his spinal cord. In the 12 years following the accident, Jeff’s condition slowly worsened, causing seizures, confusion and frequent headaches.

Jeff went through countless doctor visits and two surgeries with no significant improvements. In 2019, the pain was so bad that Jeff could no longer walk, and his dream of walking his daughter — who had recently become engaged — down the aisle no longer seemed viable.

Jeff’s physical symptoms, coupled with the PTSD he was experiencing, made his wife, Teresa, desperate for a way to get Jeff back to who he was before the accident. “You feel powerless and defenseless,” Teresa said. “He has a strong, supportive family unit, but there was no way for any of us to help him when he was hurting.” 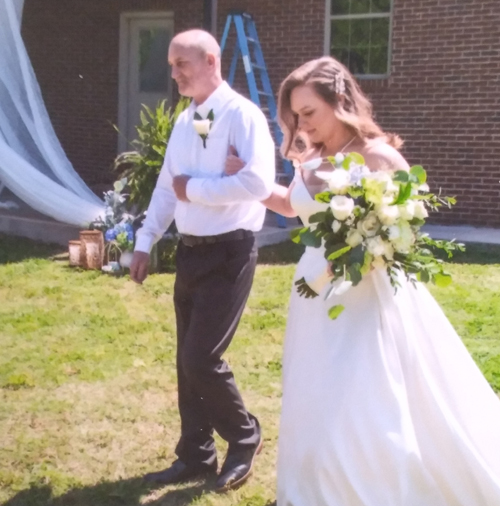 Teresa was Jeff’s biggest advocate, pushing for over a decade to get him the best treatment possible. Teresa had a broken back repaired at Vanderbilt during Jeff’s deployment, so she was able to identify and empathize with the pain Jeff was going through — making her even more intent on getting him the help he needed.

Jeff felt immediate relief upon waking up from surgery, and he was even able to get up and move around in the following days.

“Stories like Mr. Vanderford’s are what make our job here at the Vanderbilt Spine Center so special,” said Stephens. “Jeff’s case is uniquely memorable and highlights how restoring a patient’s ability to walk or use their arms and legs can have a huge impact on their lives and the lives of their families.”

“We are fortunate to have a fantastic team here at Vanderbilt that does this type of work on a regular basis. I could not do it without our fantastic, caring and skilled team members,” Stephens said.

Although the surgery was successful, Jeff still had a long road ahead to full recovery. Kayla Hines, PAC, MSPAS, played a significant role in his journey, answering questions and providing guidance to Jeff and his family.

“Jeff was always focused on the positive and didn’t let his frustrations weigh him down,” Hines said. “His recovery was the summation of his own ambition, a fantastic rehabilitation team and a very skilled surgical team.”

Two other things also aided in his recovery — chewing gum and his daughter, Sarah. As a medical assistant PRN at Vanderbilt Heart and Vascular Institute, Sarah was able to attend many of Jeff’s rehabilitation sessions and serve as a reminder of what he was working for — the chance to walk her down the aisle at her wedding in a mere six months.

The gum, also Sarah’s idea, was to keep Jeff’s neck muscles active. “Sarah told him to chew gum every day to keep those muscles moving,” said Teresa. “He did it every day religiously.”

Three months after his surgery and three months before Sarah’s wedding, Jeff was walking on his own. “Recovery was hard, but Sarah kept me from my PTSD and any downward spirals,” Jeff said. “After the third month of recovery, I could do just about anything.”

Sarah’s wedding, originally planned to be a destination wedding in the Bahamas, was downsized to a group of 13 people and moved to her backyard when COVID-19 struck. To Jeff, the location could not have been less important. The only thing that mattered to him on that day was being able to stand by his daughter’s side and walk her down the aisle.

“It was monumental for all of us,” Teresa said. “A year before that, it would’ve never been possible.”

Now, Jeff and Teresa can enjoy day-to-day life in a way they had not been able to since before Jeff was deployed. Jeff is back to his normal self, and Teresa once again recognizes the man he was before the accident. “He’s more ‘Jeff’ now than he has been since he came home from Afghanistan,” Teresa said. “Vanderbilt saved his life.”

“I thank God for Vanderbilt. Without Vanderbilt, I would not be here today,” said Jeff.