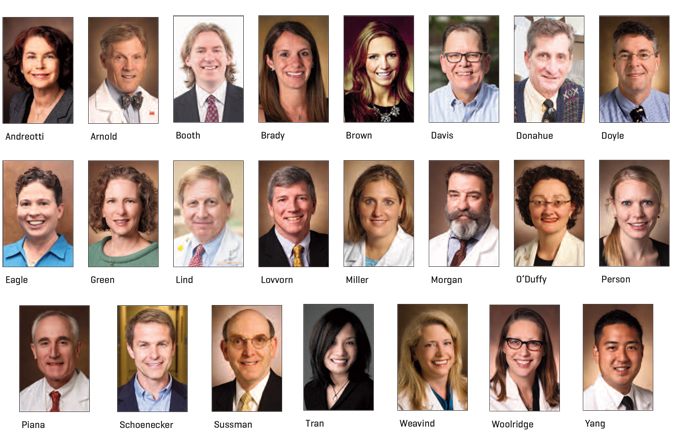 The initiative to establish the AECM grew out of a proposal from the Physician Council for Clinical Service Excellence and was formed to “honor exemplary clinicians who combine humanism, professionalism and a passion for patient care with a scholarly approach to improving patient health and who will establish a community of leaders to promote clinical excellence.”

“I want to recognize the critical role Dr. Howard Baum and Dr. Brent Graham played in conceiving the idea for this academy and then partnering with Dr. Maureen Gannon to bring it to fruition,” said David Raiford, MD, professor of Medicine, chief of Clinical Staff for VUMC, and senior associate dean for Faculty Affairs. “Being chosen is a peer-reviewed honor and not a lifetime achievement award. It is a recognition of excellence and a commitment to be part of a service entity with deeply held core values.”

In addition to honoring members for their efforts as outstanding clinicians, the ACEM promotes excellence through education and mentorship of faculty and trainees. As one of their responsibilities, new AECM members will help plan an annual symposium on clinical excellence.

“Some of the nominees conveyed in their applications and personal statements that they want to be part of building culture and passing on the legacy of clinical service and excellence,” said Baum. “Among those who were selected there is a diversity of experience and a diversity of the departments recognized. That happened organically during the selection process.”

“The most striking part of the selection process was to review the comments and letters of support from peers, staff and patients. It was very humbling to see the absolute glowing remarks that people were making about their colleagues. There is no other explanation for that other than they were genuinely impressed,” said Graham.

“The reviewers for this inaugural class are leaders from across the institution. They were very grateful to learn about these physicians and clinicians through their nomination packets and were so impressed and excited to be part of the same team and institution with these people,” said Gannon. “These comments were reiterated over and over by the reviewers during the review process.”

Inaugural members elected to the AECM underwent a rigorous selection process that included the following steps:

“This project to recognize our colleagues is not a de novo recognition, but rather is the result of a decade-long process where the organization has really made a concerted effort to recognize our clinicians as key members of our VUMC community,” said Sternberg. “This started with the launch of the Physician Council. Dr. Graham was an inaugural member of the Council and part of the initial discussions where we talked about ways where we could provide greater recognition.”

“This is part of an institutional process where the leadership really wants our clinicians to, appropriately, feel they are equal members of the community in terms of excellence and importance,” Sternberg said.

“Part of the mission, the purpose for this recognition, is the expectation that these individuals will promote the qualities that they’re bringing to their clinical work amongst their peers, whether they are more junior or of equal experience,” said Baum.

Inaugural Members of the Academy for Clinical Excellence Include: