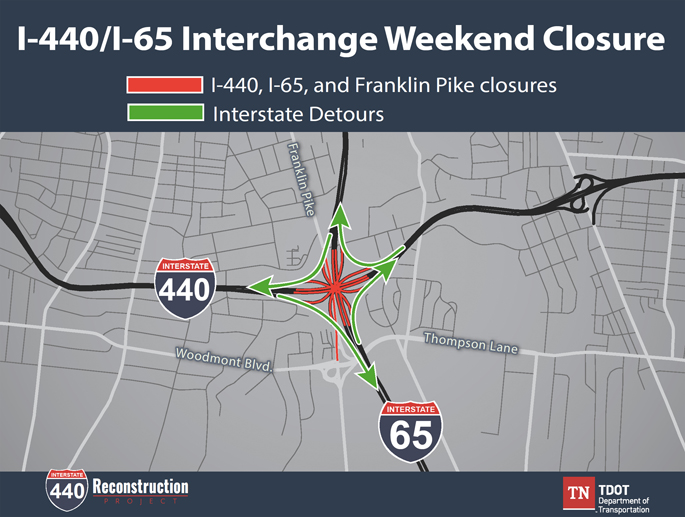 Franklin Road, which is below the flyover interchange, will also be shut down between Berry Road and Woodmont Boulevard in both directions during the same hours.

This is the second of two closures of the interchange; the first took place last September.

VUMC officials are engaged in planning with state and local officials to minimize disruption of service, as I-65 and Franklin Road are the two major routes to and from the south into Nashville. Officials anticipate increased traffic on other routes, such as Granny White Pike, Nolensville Road, Wedgewood Avenue, Harding Place and Hillsboro Road, and travel times, including for employees traveling to and from work, will be increased during the closure period.

During the affected days, traffic going toward the interchange will be reduced to one lane and detoured away from the construction area:

The work will widen the I-440 bridges over I-65 and is part of the ongoing reconstruction project on I-440, which has been underway for more than a year and scheduled to continue until August 2020.

The planned closure is dependent on weather and project progress. In the event of severe weather during the weekend planned for the work, TDOT has designated the weekend of March 27-30 as the alternate.

To view a TDOT video about the work at the interchange, click here.

To view the TDOT press release about the work, and a map of the affected areas, click here.