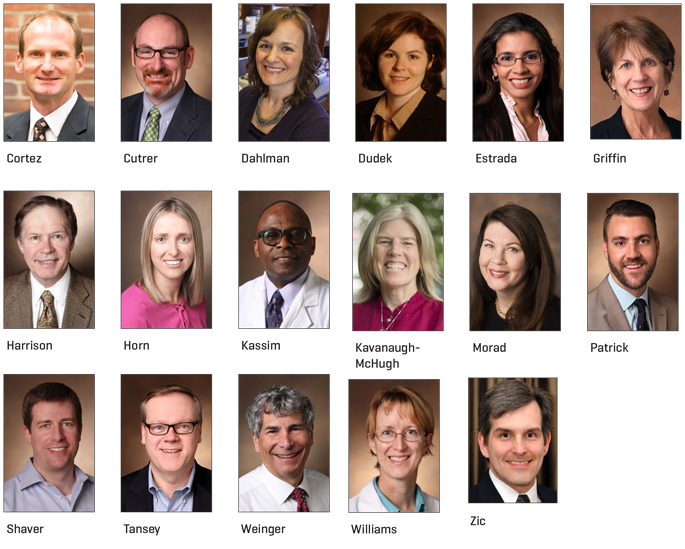 Vanderbilt University School of Medicine has announced the 2020 faculty awards for Excellence in Teaching, Outstanding Contributions to Research and Extraordinary Performance of Clinical Service.

Faculty teaching and research awards have been given annually since 2000. The clinical service awards were added in 2016. Recipients were nominated by their faculty colleagues and chosen by the 2019 Faculty Awards Selection Committees.

Recipient of the ROBERT D. COLLINS AWARD for Teaching Medical or Graduate Students or Practicing Physicians in the Lecture Setting:

Recipient of the JACEK HAWIGER AWARD for Teaching Graduate Students and Postdoctoral Fellows in the Classroom, Lecture or Small Group Setting:

Dudek, director of Obstetrical Genetic Counseling in the Department of Obstetrics and Gynecology, is being honored for her role in establishing at Vanderbilt the state’s first — and to date, only — professional master’s degree program in Genetic Counseling. The award is named for Jacek Hawiger, MD, PhD, Distinguished Professor of Medicine and founder of the Immunopathology Training Program who is known as an educational innovator.

Cutrer, Dahlman, Estrada, Weinger and Williams were recognized for their design and implementation of the innovative Immersion Phase of Curriculum 2.0 that is transforming medical education at Vanderbilt. The award is named for the late Denis M. O’Day, MD, former chair of the Department of Ophthalmology and Visual Sciences, who founded and directed the Emphasis Program of self-directed study at VUSM.

Recipient of the R. MICHAEL RODRIGUEZ AWARD for Teaching Medical Students, Residents, and/or Fellows in the Clinical Setting:

Zic, former associate dean for Admissions, is a founding member of the school’s Academy of Excellence in Teaching. He has received several awards for excellence in teaching and clinical care. The award is named for the late R Michael Rodriguez, MD, a Master Clinical Teacher in the Department of Medicine who was one of Vanderbilt’s most beloved clinical educators and mentors.

Recipient of the ELAINE SANDERS-BUSH AWARD for Mentoring Graduate and/or Medical Students in the Research Setting:

Marie Griffin, MD, MPH, professor of Health Policy and Medicine and holder of the Endowed Directorship in Public Health Research and Education

A nationally known epidemiologist who co-founded and directs the Master of Public Health program, Griffin is being recognized for her long-standing commitment to training the next generation of leaders in public health research. The award is named for Elaine Sanders-Bush, PhD, professor of Pharmacology, emerita, who during her career mentored hundreds of graduate and medical students, postdoctoral fellows and junior faculty.

Recipient of the W. ANDERSON SPICKARD JR. AWARD for Clinical Excellence in a Cognitive Discipline:

Kavanaugh-McHugh, who directs the Fetal Cardiology Program at Vanderbilt, is being honored for innovations and investigations on behalf of women who are carrying fetuses with congenital heart disease, vascular abnormalities and arrhythmias. Her award is named for W. Anderson Spickard, Jr., MD, professor of Medicine, emeritus, and an international leader in substance abuse prevention, treatment and education.

Recipients of the MILDRED T. STAHLMAN AWARD for Innovation in Clinical Care:

Morad and Patrick are being recognized for their efforts to improve care and outcomes for opioid-exposed mothers and babies through a family-centered approach and evaluation of government drug policies. Their award is named for pioneering neonatologist Mildred T. Stahlman, MD, who is credited with establishing the first newborn intensive care unit in the country to use monitored respiratory therapy on infants with damaged lungs.

Recipient of the JOHN T. TARPLEY AWARD for Commitment to Care of Underserved Communities:

Dr. Kassim, an internationally known expert on sickle cell disease, is being honored for his commitment to improving the lives of patients as a physician, researcher, educator and humanitarian supporting global health missions. The award is named for John T. Tarpley, MD, professor of Surgery and Anesthesiology, emeritus, who has trained surgeons and provided surgical care in Africa for more than four decades.

Recipient of the STANLEY COHEN AWARD for Research Bridging Diverse Disciplines, such as Chemistry or Physics, to Solve Biology’s Most Important Fundamental Questions:

Cortez is being honored for discoveries including a mechanism of single-stranded DNA repair that have advanced understanding of how DNA damage is processed. Genomic instability caused by failures in these mechanisms can lead to developmental diseases and cancer. The award is named for the late Vanderbilt biochemist Stanley Cohen, PhD, who shared the 1986 Nobel Prize in Physiology or Medicine for his discovery of epidermal growth factor.

Tansey is being honored for innovative methodological advances and impactful discoveries that have advanced understanding of MYC, a family of proteins overexpressed in cancer. The award is named for John H. Exton, MBChB, MD, PhD, professor emeritus of Molecular Physiology & Biophysics, who is known internationally for his groundbreaking work on hormone action and lipid signaling.

Recipient of the GRANT W. LIDDLE AWARD for Outstanding Contributions to Clinical Research:

Horn is being recognized for her outstanding contributions to clinical and translational investigation aimed at improving outcomes for patients with lung cancer as well as her strong commitment to training the next generation of physician-scientists. The award is named for the late Grant W. Liddle, MD, an internationally known endocrinologist and clinical researcher who chaired the Department of Medicine from 1968 to 1983.

Recipient of the CHARLES R. PARK AWARD for Basic Research Revealing Insights into Physiology and Pathophysiology:

David Harrison, MD, the Betty and Jack Bailey Professor of Medicine, Pharmacology and Physiology, and director of the Division of Clinical Pharmacology

Harrison is being honored for the breadth of his discoveries during the past 30-plus years that have helped define the immune and molecular contributors to altered vascular function in hypertension, including the role of highly reactive biomolecules called isolevuglandins. The award is named for the late Charles R. “Rollo” Park, MD, a pioneering diabetes researcher who chaired the Department of Physiology at Vanderbilt from 1952 to 1984.