Pancreatlas provides access to complex images of the human pancreas

Images of cells and tissues are a critical part of biomedical research as they show which molecules or proteins are present and where these molecules are located in the tissue. Using increasingly sophisticated microscopes and imaging approaches, scientists can now look at more than 40 different molecules at once, an approach known as multi-plex imaging, where in the past they could only look at three or four molecules at a time.

Storing, sharing, and cataloguing these complex images is challenging, especially when sharing with other scientists or in publications. To address this, a Vanderbilt multidisciplinary team studying the human pancreas and its role in diabetes created a new approach for sharing such images. 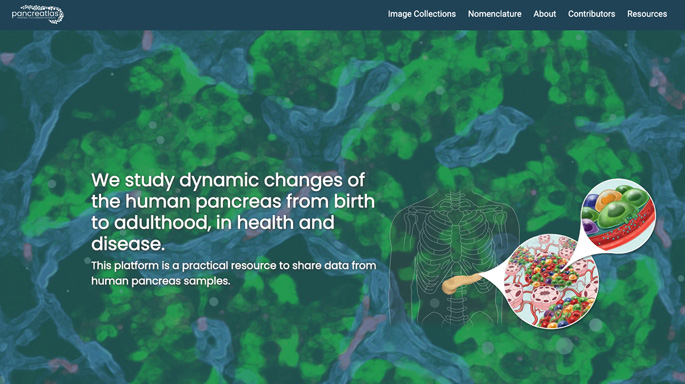 Now, through Pancreatlas, the world’s first on-line imaging database of human pancreatic tissue, a large collection of multilayered (or multi-channel) pancreatic tissue images is accessible to anyone with a computer. Pancreatlas was featured recently in the journal Patterns, a Cell Press publication.

Vanderbilt investigators Marcela Brissova, PhD, Diane Saunders, PhD, and J.P. Cartailler, PhD, recognized the need for a comprehensive atlas of the human pancreas and a platform that manages and shares imaging data in a user-friendly manner. Pancreatlas is the result of three years of design and development by the team of islet biologists and software engineers from Vanderbilt University Medical Center and Vanderbilt University (VU), and the resource now houses approximately 800 multilayered images of pancreatic tissue. Included are images from VU and VUMC investigators, as well as images from the NIH-funded Human Pancreas Analysis Program (HPAP) and the Network for Pancreatic Organ Donors with Diabetes (nPOD).

The well-catalogued images at pancreatlas.org provide the scientific community unfettered access to comprehensive images of human pancreas tissue with the hope of advancing the understanding of diseases such as diabetes, pancreatic cancer and pancreatitis.

“One of the biggest challenges in the imaging world is that there are not very good tools to manage large imaging data sets where individual researchers can actually go and interact with images live,” said Brissova, who is co-scientific director of the project. “Pancreatlas is a user-friendly platform where researchers can now interact with images, browse or navigate through them, annotate them and bookmark them.”

Pancreatlas was designed on the principles of automation and scalability as well as ease of use. By housing images within curated collections, users can access large image data sets. Filtering menus allow users to view and refine images based on multiple areas of interest. Additionally, metadata annotations are integrated into the images to provide a wealth of information about the samples.

Pancreatlas also contains comprehensive image datasets from across the human lifespan to provide context for investigators working, for example, to understand diabetes’ progression or the origins of pancreatic cancer.

Cartailler, director of Creative Data Solutions, a VU shared resource that provides bioinformatics and informatics services to the Vanderbilt community, worked with Brissova and Saunders at VUMC to find a platform that would meet their image management requirements. The closest fit was OMERO Plus and PathViewer software from Glencoe Software, but the Vanderbilt team felt another component was needed to simplify and better organize the information.

“The idea is that you have underlying databases that are specific to their domains and you have very focused viewers who can visually interact with that data, but in the middle, you really need a common interface — something people don’t really have to think too much to use,” Cartailler said. “You just want to get them from point A to point Z.”

Software engineer Jimmy Messmer, MA, was brought in to create a middleware component of Pancreatlas — an open source user interface called FFIND that makes filtering and exploring the images as seamless as a product search on Amazon. The group hopes others can take the source code for FFIND and apply it their own data outside of Pancreatlas.

“There’s a lot of potential, and FFIND would be a natural foundation to organize all sorts of collections,” Messmer said. “The work we put in over the past few years has wide-reaching implications for hopefully lots and lots of people.”

Since the human pancreas cannot be safely biopsied, the research community relies on pancreatic tissue from human donors to better understand the molecular and cellular processes of pancreatic development and disease, and these donated organs are the primary source of the images in Pancreatlas. The importance of these donors and their families isn’t lost on the developers.

“If an organ doesn’t meet the criteria for clinical use such as transplantation, that’s often when we are able to study the pancreas,” said Saunders, co-scientific director of Pancreatlas. “We’re very grateful, especially to the families of these organ donors who must make difficult decisions. We appreciate that these tissues are incredibly valuable resources, and our research community is able to make important discoveries by studying them and sharing them with scientists from around the world via Pancreatlas.”

Although Pancreatlas currently contains only imaging data, the developers plan to both expand the collections of curated images, as well as the types of related data, such as genomics and physiological information.

Images were acquired in part through use of the Vanderbilt Imaging Shared Resource (supported by NIH grants CA68485, DK20593, DK58404, DK59637, and EY08126) and the Islet Procurement and Analysis Core of the Vanderbilt Diabetes Research and Training Center (DK20593).