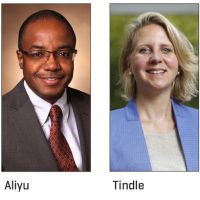 Two faculty members of Vanderbilt University School of Medicine are among 80 physician-scientists who will be inducted this year into the American Society for Clinical Investigation (ASCI), an elite honor society of physician-scientists from the upper ranks of academic medicine and industry. They are:

Aliyu, who joined the Vanderbilt faculty in 2009, is associate director for Research in the Vanderbilt Institute of Global Health and professor of Family and Community Medicine at Meharry Medical College. His research priorities include improving access to sustainable, high-quality HIV/AIDS services in resource-constrained settings.

Tindle, who joined the faculty in 2014, is founding director of ViTAL, the Vanderbilt Center for Tobacco, Addiction and Lifestyle, and a nationally recognized expert on smoking cessation. At the state and national levels, she is applying a patient-centered approach to tobacco control for large populations.

“Election to the ASCI is one of the most prestigious honors bestowed on physician scientists,” said ASCI President Lorraine Ware, MD, the Ralph and Lulu Owen Professor of Medicine and professor of Pathology, Microbiology and Immunology at Vanderbilt University Medical Center.

“We’re so proud to have the recognition of these talented faculty with this election,” said ASCI Immediate Past President Kimryn Rathmell, MD, PhD, Hugh J. Morgan Professor and chair of the Department of Medicine at VUMC.

“Membership in this elite organization is a tremendous mark of distinction, and Dr. Tindle and Dr. Aliyu have made the kind of impact in the realm of medicine — in changing the dialogue around smoking cessation and maternal-fetal transmission of HIV, respectively — that one can call disruptive,” Rathmell said.

“It is fitting that the theme of the meeting this year is Disruption in Medicine, in the year when these two disruptors are inducted,” she said.

Ware will give the ASCI Presidential Address at the meeting.

Fifty-five current and emeritus Vanderbilt faculty members have been inducted into the ASCI.