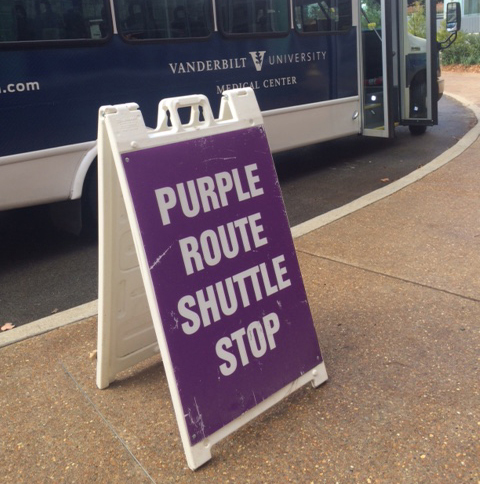 “The division will make the two routes more operationally efficient and will reduce travel times between the West End buildings and the Round Wing stop at Medical Center North,” said Jason Bucher, director of Parking and Transportation Services for VUMC.

One new route will be called the Crystal Terrace Route and the other will be called the 3401 Route, both named after the primary buildings served. Other stops on both routes will be the N Lot (73A), 3322 West End, 2525 West End, and Monroe Carell Jr. Children’s Hospital at Vanderbilt.

In addition, a loop route serving 3401 West End, 3322 West End, and the N Lot (73A) will run during peak morning and evening times, to serve people who work in those buildings and park off site.

A timetable with maps of the new routes are here.

The lightly-used stop at the Blakemore Buildings has been eliminated from the new routes, following the addition of a traffic signal at the crosswalk between those buildings and campus, making the short journey on foot safer.

The changes to the routes will also result in less shuttle traffic through surrounding neighborhoods, Bucher said.

Employees can track the movements of all shuttles, set alerts, and monitor arrival times using the Pasio Go app, available for use on most smartphones. A story about the new app is here.