Researchers from the Vanderbilt Kennedy Center Treatment and Research Institute for Autism Spectrum Disorders (TRIAD) and partners from technology start-up Adaptive Technology Consulting have been awarded $1 million from the National Institute of Mental Health to evaluate a new mobile app designed to help pediatricians recognize autism risk in young children.

The app, named Autoscreen, walks pediatric providers through a short series of play activities and guides them through a set of observations designed to calculate a child’s autism risk. It is designed to speed the time from initial concerns of autism to diagnosis, which currently can take months, if not over a year, for many families. 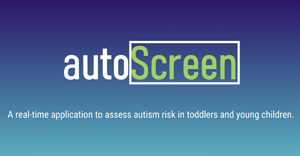 “The American Academy of Pediatrics recommends a screening for autism at ages 18 and 24 months. There are a lot of tools on the market that allow pediatricians to do that — most of which are a paper-and-pencil parent report,” said Amy Weitlauf, PhD, assistant professor of Pediatrics and an investigator for the study.

“Sometimes, when pediatricians get those questionnaires back, they want to go a step further and do something interactive with a child, but they don’t often have the training, guidance or time to learn some of the tools that are available.”

Autoscreen takes less than 20 minutes to complete and provides a low-cost, easy-to-use, guided tool to help providers make decisions regarding risk and lead conversations with families.

The algorithm for the screener, developed for TRIAD by Joshua Wade and Nilanjan Sarkar, PhD, who both have ties to the Vanderbilt University School of Engineering and who co-founded Adaptive Technology Consulting, was created by conducting an advanced computational analysis of a dataset of gold-standard evaluation tools and clinical observations of more than 700 children evaluated for autism by TRIAD clinicians.

“Unlike other screening tools, Autoscreen provides an assessment of autism based on quick and meaningful in-person clinical observations without extensive training or expensive materials,” said Wade.

In phase I of the study, the app demonstrated an accuracy rate of 80% in predicting whether participants from a group of 42 children would receive a diagnosis of autism, as confirmed by a formal evaluation.

The study’s second trial will enroll 200 children, including those who are neurotypical or at risk for other developmental disorders, between the ages of 18 and 36 months to better evaluate the technology’s accuracy.

The trial will also allow primary care providers, specialty clinicians and early interventionists to practice using the app and provide feedback for improvement.

“This pragmatic utilization of intelligent technology has the potential to radically advance how we talk about and act on autism risk in pediatric offices,” said Zachary Warren, PhD, associate professor of Pediatrics and principal investigator of VUMC’s portion of the project.

Features that Wade and Sarkar are working to add in the future include language variances and integration with electronic health record systems.