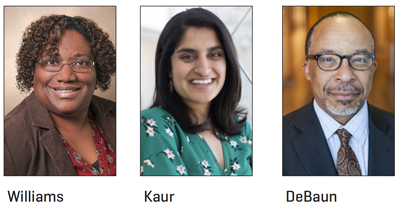 Three co-chairs have been named to lead a new Racial Equity Task Force, which is charged with identifying barriers to and opportunities for achieving racial equity at Vanderbilt University Medical Center and Vanderbilt University School of Medicine (VUSM). The Racial Equity Task Force is one of the key actions recently announced by Dr. Jeff Balser, VUMC CEO and Dean of VUSM, to take additional concrete steps to fulfill the Medical Center’s commitments to dismantling racism and battling all forms of discrimination.

The three co-chairs are

The Racial Equity Task Force will include individuals representing Medical Center staff, students, trainees and faculty. The Task Force will obtain feedback from across VUMC and will present options that represent significant institutional commitments to combat structural racism. The results will be provided to the Office of the CEO and Dean and will be shared with the VUMC community along with action plans to address the findings before the end of 2020.

Other actions in the overall plan for confronting racial inequities include providing anti-racism training for senior leaders, examining existing policies and practices that may disadvantage racial and ethnic minorities, and integrating content on racism and racial equity into VUSM’s curriculum. To volunteer or nominate someone for the Task Force or share feedback about the plan, complete this form.