Vanderbilt University Medical Center has been named a National Organization for Rare Disorders (NORD) Center of Excellence, joining 31 medical centers as part of an innovative network seeking to expand access and advance care and research for rare disease patients in the United States.

The Vanderbilt Undiagnosed Diseases Program (VUDP), which accepts patients with undiagnosed and rare diseases, will be part of a unique network of institutions dedicated to the outstanding treatment of rare disease patients and collaboration to improve standards of care, advance research and increase awareness about rare diseases in the broader medical and patient communities. 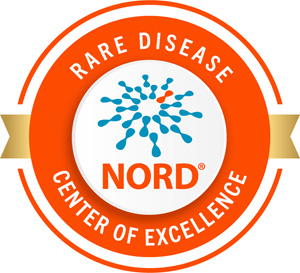 The goal of establishing the Centers of Excellence is to foster knowledge sharing between experts across the country, connect patients to appropriate scientists regardless of disease or geography and improve the pace of progress in rare disease diagnosis, treatment and research.

VUMC, an original member institution of the National Institutes of Health’s Undiagnosed Diseases Network (UDN) established in 2008, launched the VUDP in April to operate alongside the UDN program. The goal is to expand services to many more patients who are living with the often-dire consequences of an undiagnosed disease. Philanthropic support from families, foundations and corporations has been critical to the establishment and growth of the program.

“The NORD designation is a national recognition of VUMC’s institutional commitment to be a leader in rare and undiagnosed disorders and serve the needs of these patients locally, nationally and internationally,” said Rizwan Hamid, MD, PhD, Dorothy O. Wells Professor of Pediatrics, director of Pediatric Medical Genetics and Genomic Medicine and director of VUMC’s program.

According to the National Institutes of Health, there are an estimated 30 million people in the United States with rare diseases (a disease that affects fewer than 200,000 people in the U.S. is considered rare), and as many as 1 in 10 are without a diagnosis.

The VUDP uses Vanderbilt’s unique capabilities for analyzing genetic results, including its BioVU databank that allows for searches for genes and gene variants.

This program draws on the expertise and collaborative spirit of the clinicians and scientists from across VUMC’s campus and is housed in Monroe Carell Jr. Children’s Hospital at Vanderbilt.

“Right now, far too many diseases are without an established standard of care,” said Ed Neilan, chief scientific and medical officer of NORD. “The Centers of Excellence program will help set that standard – for patients, clinicians and medical centers alike.

“We are proud to announce Vanderbilt University Medical Center as a NORD Rare Disease Center of Excellence and look forward to their many further contributions as we collectively seek to improve health equity, care and research to support all individuals with rare diseases.”

For more information about the VUDP, including how to apply, visit: www.vanderbilthealth.com/service/undiagnosed-diseases-program.