After a month of cough, off-and-on fever, not feeling well and isolation, Joseph “Jo Jo” Bostain is back to bouncing on his trampoline, reading Harry Potter books and planting flowers outside his Clarksville home.

When Joseph began coughing in early March, his mother, Sabrina Bostain, wasn’t alarmed. Coughs are not uncommon for the 6-year-old first grader.

Joseph was born with cystic fibrosis (CF), a rare lung disease found in roughly 30,000 people in the United States. In people with the disease, a defective gene causes the secretions to become sticky and thick, plugging up tubes, ducts and passageways, especially in the lungs and pancreas.

He does lung treatments twice daily to clear his airways and keep his lungs healthy. Even as he developed fever, sore throat and a headache, Sabrina thought he had strep throat or possibly even the flu.

The newly circulating coronavirus, COVID-19, hadn’t entered her mind. Few if any cases had been reported in the U.S., she recalls. The disease, characterized by cough, fever and difficulty breathing, seemed worlds away. Fewer cases have been reported among children, for reasons not entirely understood.

Sabrina brought him to Monroe Carell Jr. Children’s Hospital at Vanderbilt to see pulmonologist Andrew Sokolow, MD. He was swabbed for strep, flu and COVID-19.

“I was not even thinking of the virus. At the time you heard about it, but it wasn’t a huge thing. Because he had symptoms of (COVID-19), they went on and tested him for that. We were waiting for normal swabs,” his mom said.

On March 19, Vanderbilt called the Bostains to confirm Joseph tested positive for COVID-19. “I was shocked. I was stunned. I wasn’t expecting that,” Sabrina said. “I had not heard too much about it, but after Joseph tested positive, I started reading more. I was more concerned what his breathing would be like and if it would get worse.”

At Children’s Hospital about 4% to 5% of children tested for COVID-19 have had positive results, and there has been only one child admitted to the hospital to date.

While the disease seems to be less severe in children and rarely requires them to be hospitalized, there is always concern for pediatric patients with underlying conditions, especially those with lung disease, says Rebekah Flowers Brown, MD, a pediatric pulmonologist at Children’s Hospital.

“In addition, the lungs of children with CF are colonized with bacteria. In the setting of viral illnesses like COVID-19, these bacteria have the opportunity to grow in numbers and cause more complications. Children with CF exacerbations have to take antibiotics to decrease the growth of these bacteria even though the initial trigger may be a virus which does not respond to antibiotics,” Brown said.

The watch over Joseph began. His father, Timothy, slept in a recliner to keep an eye on him at night. Sabrina, who is immunocompromised herself, couldn’t be around Joseph, only sending her love and kisses from a distance, which was hard for mother and son.

“We explained to him (about COVID-19). He didn’t want it anymore. He didn’t like the idea no one could be around him anymore,” she said.

In the beginning, Joseph slept a lot. At its highest, his fever was 102. Because of his lung condition, the family used a pulse oximeter to check his oxygen, which dropped to 93% saturation, a number to watch. His cough and headaches were the worst part. 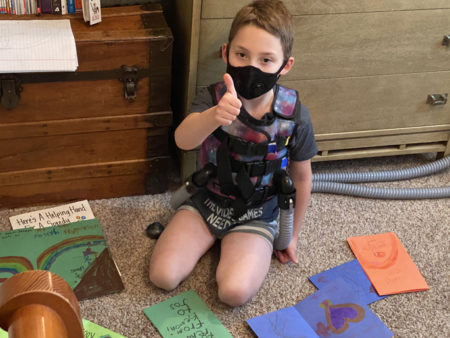 The pediatric pulmonology team connected with the family over the phone and computer, which Sabrina was thankful for. “They’re the best — Vanderbilt. I love them. They’re very thorough,” she said.

Per the team’s guidance, the family increased Joseph’s lung treatments to four times per day.

“For Jo Jo and his family, we had frequent check-ins to make sure he was doing OK while he was recovering. For two weeks, our clinic checked in with the family at least every other day, and more frequently if he was having changes in his symptoms, so that we could remain proactive about his treatment,” Brown said.

As Joseph began his recovery, news spread across the community about his illness, and the support poured in. A parade of cars drove by his house; friends, family and neighbors made meals for his family; gifts of toys and Legos along with letters arrived at his house; and he talked to his teachers over FaceTime.

“He has had some amazing support,” Sabrina said.

About 11 days in to his illness as the family thought he had recovered, his fever spiked again, and his 14-day quarantine started all over.

Easter Sunday, April 12, is the date the Bostains consider Joseph clear of COVID-19. The family members in the house — father, mother and sister, Maddie, 25 – all think they had the virus, though in mild forms. They are now participating in research, providing swabs and samples, to help Vanderbilt further understand the illness.

“I know people are scared, but I would just say, be smart. Wash your hands, wear a mask,” said Sabrina, who noted that even before COVID-19 the family took precautions to protect Joseph. He regularly wears a mask, and they always sanitize their house.