The cost and effectiveness of social media as a participant recruitment tool for clinical research is still being evaluated. To better understand its utility, researchers at Vanderbilt University Medical Center used Facebook to mount a short, monthlong pilot campaign in and around Houston attempting to recruit participants for an ongoing smoking cessation study being conducted in that city. 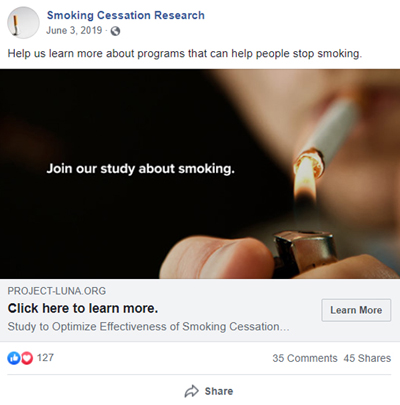 From June 3 to June 30, 2019, two campaign posts, one focused on smoking cessation and the other on early lung cancer detection, were displayed to Facebook users 1.2 million times at an overall cost of $10,135 (including fees to Facebook and to a Memphis, Tennessee, advertising firm that developed the posts). Timing and placement of both posts were determined by Facebook’s algorithms. The posts received 6,490 clicks (“click-through” rate 0.55%), which took individuals not to the study website proper, but to an intermediary “landing page” providing an overview of the study. From there, individuals clicked on an “I am interested” link 473 times, which took them to an initial screening form.

Out of 40 individuals who eventually undertook full screening via telephone, 23 met study criteria and were enrolled, with the social media campaign cost per participant coming in at an estimated $441.

“The Facebook campaign proved successful in both increasing interest in the study and recruiting participants relatively quickly. However, we recognize the overall costs may be prohibitive for many studies,” said Sarah Cook, MPH, research services consultant with the Vanderbilt Institute for Clinical and Translational Research. “Research teams should consider social media as one tool in the recruitment tool chest that could significantly boost enrollment within a short timeframe.”

Cook, Paul Harris, PhD, professor of Biomedical Informatics and director of the Office of Research Informatics at VUMC, and colleagues report the campaign in Contemporary Clinical Trials.

The study was conducted through the Recruitment Innovation Center, led by Harris and Consuelo Wilkins, MD, MSCI, Senior Vice President for Health Equity and Inclusive Excellence at VUMC. Others on the study from VUMC include Rebecca Jerome, MLIS, MPH, Julia Dunagan, MBA, Nan Kennedy, Terri Edwards, RN, and Wilkins. They were joined by researchers at the University of Texas MD Anderson Cancer Center. The study was supported by the National Institutes of Health (TR002243, TR001579).