A new poll of Tennessee parents from the Vanderbilt Center for Child Health Policy found that most Tennessee parents placed school quality and child mental health at the top of their list of concerns for their children, with both among the top five concerns across the state’s grand divisions and among racial and ethnic groups.

The concerns were part of the center’s fourth statewide annual poll covering a range of topics related to child health and well-being. Results were collected in the late fall of 2022 and will be shared over the next several months as further analysis is conducted. 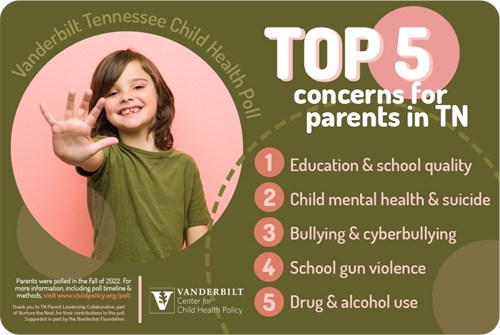 “Parents’ top concerns have been consistent in recent years, with two in five parents rating education and school quality as their top concern for their children. As we emerge from the pandemic, we see parents increasingly worried about child mental health and suicide, with 36% of parents citing this as a top concern compared to 31% last year. Collectively, the top five list provides important insight into Tennessee parents’ chief concerns for their children,” said Stephen Patrick, MD, MPH, director of the Vanderbilt Center for Child Health Policy.

In addition to school quality and child mental health, the poll found surveyed parents were most concerned about bullying and cyberbullying, school gun violence, and drug and alcohol use.

The top five concerns were similar to parents’ concerns from the previous years’ poll results, though school gun violence appeared in the top five for the first time, researchers noted.

“Concern for their children’s mental health is top of mind for Tennessee parents now more than ever. As I talk to parents of my patients, they often note how challenging it can be to find mental health providers in Tennessee. This means that milder mental health issues end up escalating to a crisis, and more and more children showing up in emergency rooms and urgent care for mental health needs,” said Katherine Spencer, Psy.D, HSP, psychologist and assistant professor of Clinical Pediatrics.

Similar to previous years, bullying (including cyberbullying) was in the list of top five (36% of parents); however, new this year was school gun violence (27% of parents).

Concerns among parents differed by race and ethnicity. While education and school quality topped the list for both Black and white parents, more than 38% of Black parents listed racial inequality as a top concern for their children, and 28% also listed safe and affordable housing as a top concern.

The top five concerns were similar when separated by West, Middle or East Tennessee, but in a different order.

“While parents’ concerns were similar across Tennessee regions and by parental race, there were notable differences. Black parents raised concerns about racial inequality and affordable housing, while school gun violence and drug/alcohol use topped the list for white parents,” said Patrick.

The results on Tennessee parents’ top five concerns are the first in a series of polling data releases. Over the next several months, the Vanderbilt Center for Child Health Policy will disseminate findings collected on array of other issues from mental health to COVID-19.

The data, collected from a representative sample of Tennessee parents across each of the three regions in the state, will be collated and shared with the goal of informing the public and policymakers about the issues on parents’ minds in different regions and between different racial/ethnic groups in the state, Patrick said.

The poll is conducted annually and covers a range of issues including health insurance status, schooling, behavioral health, food security and access to health care. The research was funded in part by a grant from the Boedecker Foundation.