Parental substance use linked to increase in infants in foster care

The nation’s opioid crisis is a factor in the recent increase in the number of infants entering the nation’s foster care system, with at least half of all infant placements now a result of parental substance use, according to a new analysis from researchers at Vanderbilt University Medical Center and the RAND Corporation. 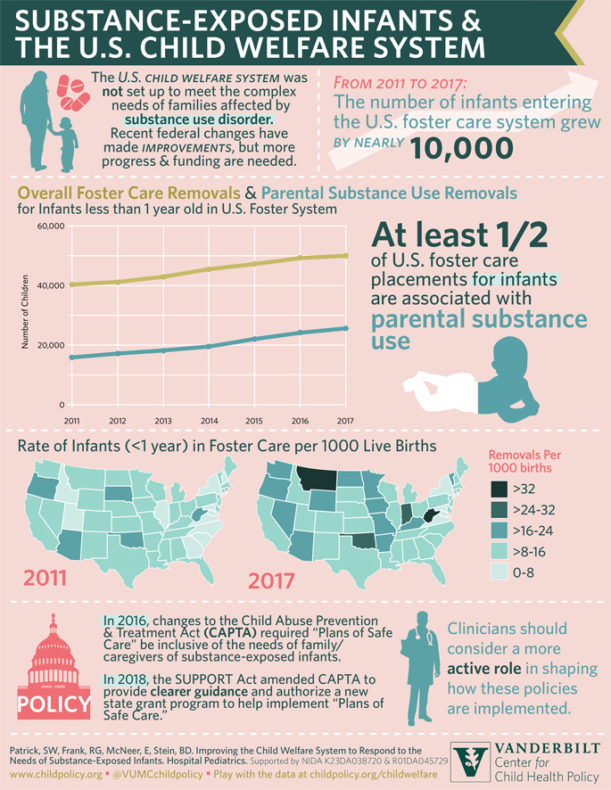 The analysis is published in a “Perspectives” piece in the August special edition of Hospital Pediatrics focused on newborns diagnosed with drug withdrawal after birth, also known as neonatal abstinence syndrome.

“The opioid crisis continues to substantially affect pregnant women and infants. Our child welfare system was largely built to respond to infants suffering physical and sexual abuse — not the complex needs that often occur in families affected by substance use disorders,” said Bradley Stein, MD, PhD, senior author of the study and director of the RAND Opioid Policy Center.

Recently, Congress made several changes to the U.S. foster care system aimed primarily at trying to keep the mother and newborn together by addressing the treatment needs of both collectively. Unfortunately, many states have struggled to implement these new policies thus limiting their effect.

“While Congress recently made several improvements to the nation’s child welfare system, there remains a critical need for more funding and modernization to respond to the needs of families affected by the opioid crisis,” said Stephen Patrick, MD, MPH, MS, director of the Vanderbilt Center for Child Health Policy and lead author of the paper. “Often we react to problems like this in silos. The rise of infants in foster care occurs at the intersection of the health care and child welfare systems. We need real and lasting partnerships between health care and child welfare providers to address the needs of our families.”

This study is part of the team’s work to understand broader issues facing pregnant women and infants affected by the opioid crisis. Earlier this year, the team published a detailed analysis finding that counties with prolonged economic downturns were more likely to have higher rates of neonatal abstinence syndrome.