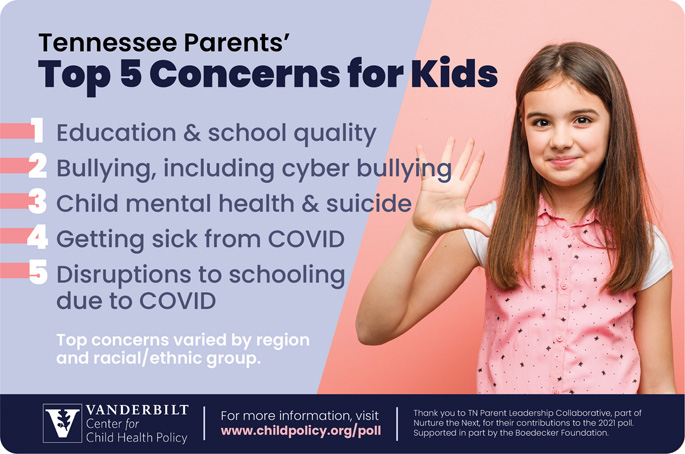 A new poll of Tennessee parents from the Vanderbilt Center for Child Health Policy has found that education and school quality top the list of parental concerns in the state. When asked to select their top worries for children, these two issues were consistently among the top five for parents polled across the state’s three grand divisions and among racial and ethnic groups.

The concerns were part of a statewide poll covering a range of topics related to child health and well-being. Results were collected in late fall 2021 and revealed differing concerns by region and race/ethnicity. Poll results will be shared over the next several weeks as further analysis is conducted, with new data and infographics released weekly.

“The last two years have been exceptionally challenging for Tennessee families. The Vanderbilt Child Health Poll enables us to hear directly from parents about the most pressing issues their children are facing,” said Stephen Patrick, MD, MPH, director of the Vanderbilt Center for Child Health Policy.

Among both white and Black parents, education and school quality topped the list of concerns, while bullying and cyberbullying were the top concerns for parents in all other racial/ethnic groups.

Regionally, parents consistently listed education and school quality as their top concern, though there were slight differences in ranking. Non-white parents ranked racial inequality in their top five concerns, while white parents did not.

“Overall, we see that parents are worried about their children’s education, mental health and cyberbullying. However, we also see differences in parents’ priorities based on their race and location. For example, we found that one in three Black parents are worried about racial inequality and gun violence, but those issues do not even make the list of top five concerns for white parents,” said Patrick.

The top five concerns among Tennessee parents’ poll is the first in a series of polling data releases.

Over the next several weeks, the Vanderbilt Center for Child Health Policy will disseminate findings collected on array of other issues from mental health to COVID-19.

The data, collected from a representative sample of Tennessee parents across each of the three grand divisions of the state, will be collated and shared with the goal of informing the public and policymakers about the issues on parents’ minds in differing regions and among differing racial/ethnic groups in the state, Patrick said.