The rate of mothers who had an opioid-related diagnosis when delivering their baby increased by 131% from 2010-2017, as the incidence of babies diagnosed with drug withdrawal, known as neonatal abstinence syndrome (NAS), increased by 82% nationally during that same time period.

The study, published today JAMA, was led by researchers at the Health Resources and Services Administration (HRSA) of the U.S. Department of Health and Human Services in collaboration with the Centers for Disease Control and Prevention (CDC), the Agency for Healthcare Research and Quality (AHRQ) and Vanderbilt University Medical Center. 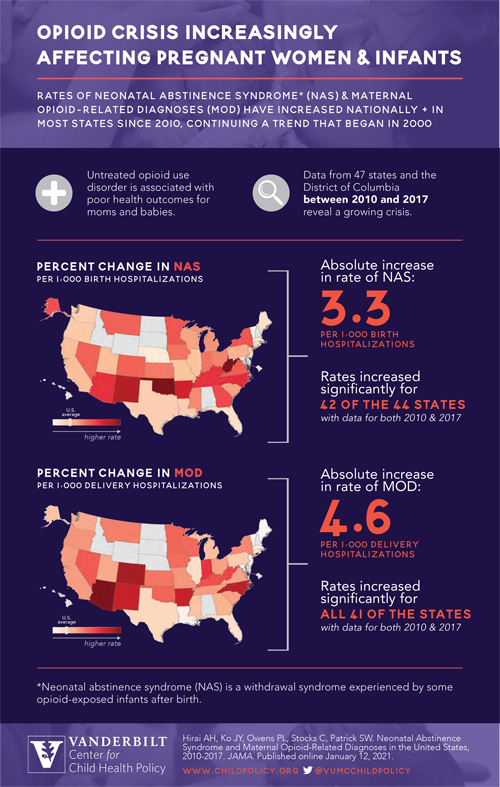 “The opioid crisis is taking an increasing toll on pregnant women and infants nationwide. While no U.S. state has been spared from the crisis, its toll in parts of the Northeast and Appalachia have been profound. Strikingly, more than 5% of West Virginia infants were diagnosed with drug withdrawal in 2017,” said senior author Stephen Patrick, MD, MPH, director, Center for Child Health Policy at VUMC.

“Our findings highlight the urgent need to provide support for pregnant women and infants affected by the opioid crisis. Across the country, pregnant women still struggle to find treatment for opioid use disorder, and opioid-exposed infants experience variable care in hospitals. We need to act to address these critical needs with comprehensive public health solutions,” said Patrick, also a guest researcher at the CDC.

The researchers analyzed 11.8 million records from community, non-rehabilitation hospitals in 47 states and the District of Columbia, looking for NAS and maternal opioid diagnoses in hospital records from 2010 through 2017.

“Our findings highlight substantial state variation with as many as 1 in 20 deliveries affected by opioids in West Virginia and Vermont, yet increased rates of opioid diagnoses were seen in nearly all states. Half of the states more than doubled their rates during the study period,” said lead author Ashley Hirai, PhD, of HRSA’s Maternal and Child Health Bureau (MCHB). “State-specific data are key to driving action and informing strategies to help prevent inappropriate opioid use and screen for and treat opioid use disorder in pregnancy.”

“We found that rural, white, and Medicaid populations continue to have the highest rates of maternal opioid-related diagnoses and neonatal abstinence syndrome,” said Jean Ko, PhD, lead of the Maternal Health and Chronic Disease Team in CDC’s Division of Reproductive Health. “However, large variations by state highlight the importance of state-level strategies and initiatives to address the opioid crisis for pregnant and postpartum women and their infants.”

The study also showed plateaus in opioid diagnoses in heavily affected New England states that may suggest some progress.

“We hope to see more state progress as newer data becomes available, but it’s unclear how the COVID-19 pandemic may have affected opioid use disorder and access to treatment,” said Pamela Owens, PhD, senior research scientist at AHRQ. “Continued monitoring is essential to help inform and evaluate national and state-based efforts to prevent and improve care for opioid-affected pregnancies.”

As part of the CDC’s five-point strategy to prevent opioid overdoses and harms, the Division of Reproductive Health (DRH) is working to prevent, identify and improve access to treatment of opioid use disorder among women of reproductive age.